Chris Gardener was the key note speaker at the Keller Williams Convention yesterday.  His story was told in the movie starring Will Smith. As a little boy his mother told him he could do anything he wanted to do or be anything he wanted to be. So when he was 18 he decided he would be Miles Davis the trumpet player, until his mother told him that there was only one Miles Davis and he was not going to be that one. He was in the navy for 4 years. He loved that experience and learned a lot. He and his son became homeless because life happens and circumstances are not always under your control.  Because of a fight with his wife, the neighbors called the police. He was sent to jail because of outstanding parking tickets. He was imprisoned with a murder, rapist, and arsonist. While he was in prison his wife left him with nothing, not even his baby boy. This was heart breaking because it was his number one goal in life to be a daddy that was always there. After months of looking for his wife and baby boy, a knock came on his door and the wife left him with the baby. For a year, they were homeless sleeping in shelters, train stations, and even on the street. At times like this they didn’t know where their next meal was going to come from. There was a time when a lady of the evening performed a random act of kindness by simply giving his 14 month old a 5 dollar bill. Their car was a grocery cart and one day there were no grocery carts available and the toddler said “Dad, where did you park the car?” He didn’t know their circumstances were bad and he didn’t need to know.  Some statistics show that 30% of working families are homeless. Even though he had a real job, he couldn’t take care of his family. He went to church every single day. There was a shelter that had food for the soul and served 1000 meals a day to the homeless. He was homeless but not hopeless. He got a new job with an interviewer on wall street and made 200 calls every single day no matter what. He was persistent in his pursuit of happyness. On one of his calls he talked to a guy in Midland. Day after day, Chris Gardeners’ job was to perform and add value and wealth to his client’s portfolio. After a year, the man from Midland came in meet him. He was so impressed that he gave him all of his accounts! After a year of skimping and saving, Chris and his son rented a house with a rose bush.  His house was only a couple blocks from work and 3 blocks from the train station. Fortunately a new child care facility opened up at the train station called “A Place Called Happyness.” The story of his life has been on Barbara Walters, Oprah, and now there is even a sequel to the movie in his future. It pays to be responsible, determined, and persistent! By the way, if you’re looking for your dream home call The R.E.D Team or The Real Estate Dream Team and we will give you a key! 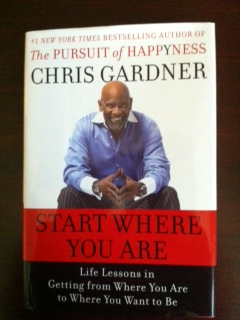